How Tech2B contributes to efficiency: Success formula from Bestronics 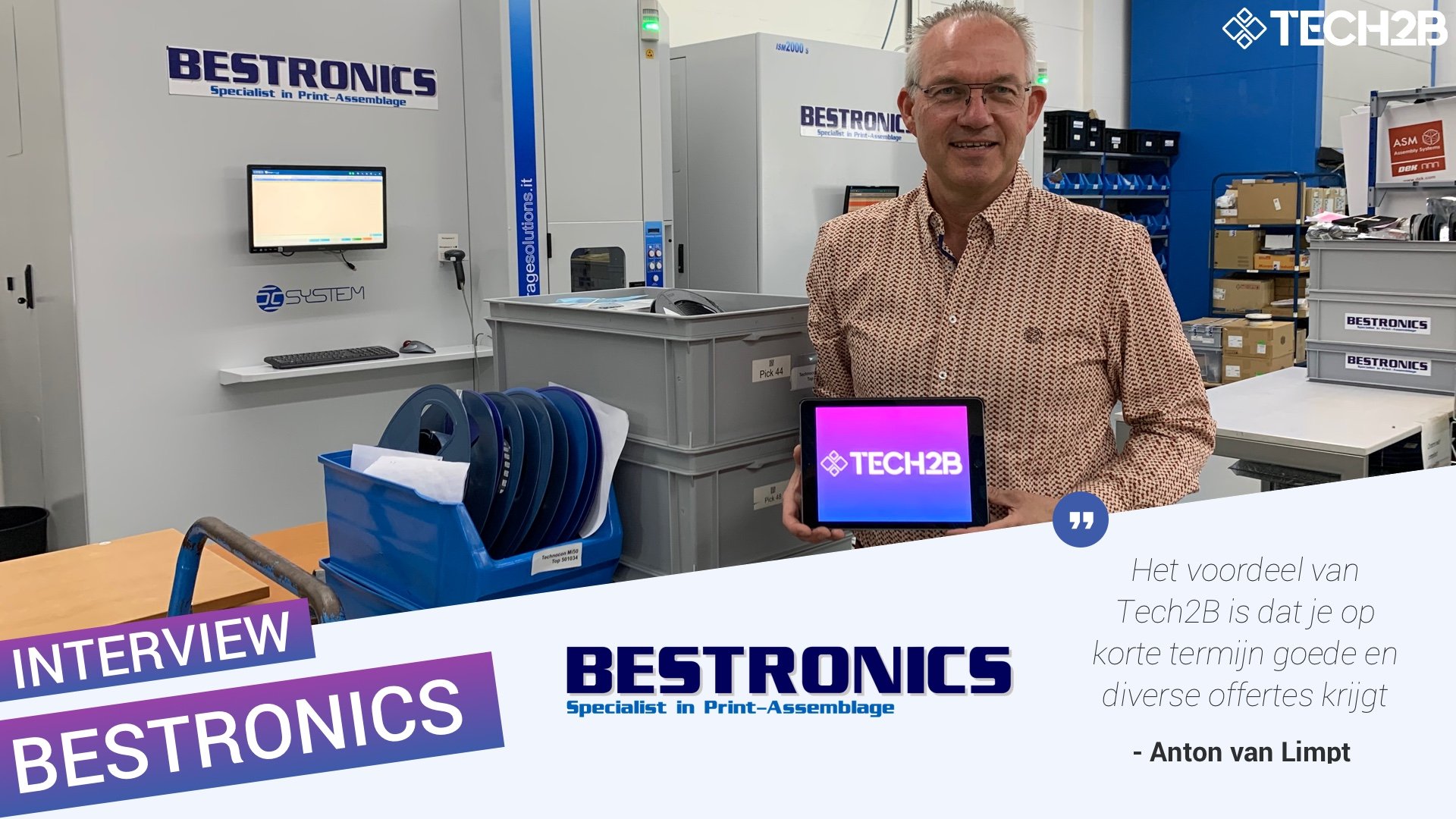 How Tech2B contributes to efficiency: the success formula of Bestronics

What do you do when customers decide to have their items produced in China from now on? It happened to Bestronics: they experience considerable competition. According to CEO Anton van Limpt, China has been “the promised land” according to many. As a company you then have two choices: accept that your customers leave or become inventive and bring them back.

The latter is exactly what Bestronics has done, resulting in successful reshoring. Tech2B indirectly contributes to this. Bestronics is a development and assembly company for high tech electronics with their core business in printed circuit boards: the heart of many electronics. The organization is located in Veldhoven where they have 4 machine lines. Van Limpt is proud of both. “I have a view of the ASML tower” he tells about their location.

They work on electronics for various big names such as Audi, BMW and Porsche. Sometimes they produce printed circuit boards on prescription, other times they think and collaborate on the development of a complete product. “Just what the customer wants.” says Van Limpt. He adds that there is often also a piece of final assembly at the back “We can process anything that contains a printed circuit board. From packaging to the logistics part”.

What is Van Limpt most proud of? “That we have been able to keep a lot of production of large numbers in the Netherlands and recover it from the low-wage countries,” says van Limpt. They fought hard for that as a company. “These automotive products in particular are normally products that immediately disappear abroad,” he says.

How did they bring that production back to the Netherlands? “Because of the lean approach,” explains Van Limpt, “You cannot charge double the price of other countries, but because we have set up our company lean, our prices are fairly equal”. In addition, they have automated most of their production chain.

“Everything that requires hands is expensive,” says Van Limpt. In China, for example, a lot of things are made by hand: at Bestronics they try to do that as little as possible “That also keeps our prices acceptable.” In this way they were able to convince many customers to bring their production back to the Netherlands.

Efficiency - including in costs - is therefore the success formula of Bestronics. According to Van Limpt, it is therefore useful that fast switching is possible via the Tech2B platform. “I think it's a nice network. A useful network. And I have to say that we also get a lot of positive response from it.” They mainly use Tech2B for parts that they cannot produce themselves. “The moment I have to have an aluminum plate milled, that is completely foreign to us. I will then throw that on Tech2B.” “The advantage of Tech2B is that you receive good and diverse quotes in the short term. Through that communication you often also receive tips about the feasibility of certain things. […] Sometimes, for example, I get feedback that something can be finished differently, or needs to be made with different material. Of course we are also open to that. That is an extra added value that I discovered at Tech2B.” said Van Limpt.

What does Bestronics mainly use the Tech2B platform for? The most important thing for Van Limpt is the favorable price offers that he receives via the platform. He calls this feedback on product ideas the “by-catch”. “I have to say that I see huge price differences. This also allows you to recalibrate your purchase. We were used to always ordering products from our own suppliers, but now I've thrown in a few at Tech2B and I see that I can get price advantages. “

Van Limpt also notes that he comes into contact with the right companies much faster. “There are materials and workpieces that we didn't really know what to do with them before.” he says “Normally you can call endlessly and look around for makers. Now you put it on Tech2B and a lot of providers report themselves. There's a lot of convenience in that for us.”

For example, last week I had to have aluminum feet. I wouldn't know where to find it. So I put it on Tech2B and immediately makers offer themselves. Then the phone starts to rattle by itself.

How was the first experience with Tech2B?

Bestronics started with the platform at the beginning of Tech2B. That's why, according to Van Limpt, it sometimes took a while to find "But they were really super supportive." He said “The support line is really short, so that's great!” Thanks to Tech2B, they switch easily and quickly with makers who know everything about mechanics. “It is very nice for us to work with it. We are not so well known in that mechanical world.” Benefits for the innovative sector “In this way, the innovative sector can collect quotations and products faster and more transparently with Tech2B. And get new providers

Benefits for the innovative sector

“In this way, the innovative sector can collect quotations and products faster and more transparently with Tech2B. And new suppliers are given the opportunity to offer products.” Van Limpt adds. And new creators? They often offer new ideas and insights. “Both in price and product.”

We asked Van Limpt if there are any Tech2B functionalities on his wish list. “Yes, I do have some things that would be more convenient.” was his answer. After thinking about it for a while, he comes up with the following idea: "Being able to post a notification that an assignment has been awarded or that an assignment has been put on hold or has been moved." “If something is now on hold, I still get calls from providers,” he laughs.

All in all, Van Limpt is clearly happy with the platform. Thanks to Tech2B, Bestronics has been able to organize purchasing a lot more (cost) efficiently. In addition, they can now take on many more production jobs, because they no longer have to spend hours calling around for aluminum feet. Whether Van Limpt would recommend Tech2B to other companies? His answer: “Yes, absolutely!”