Canline: “Tech2B is particularly distinctive in the quotation phase” 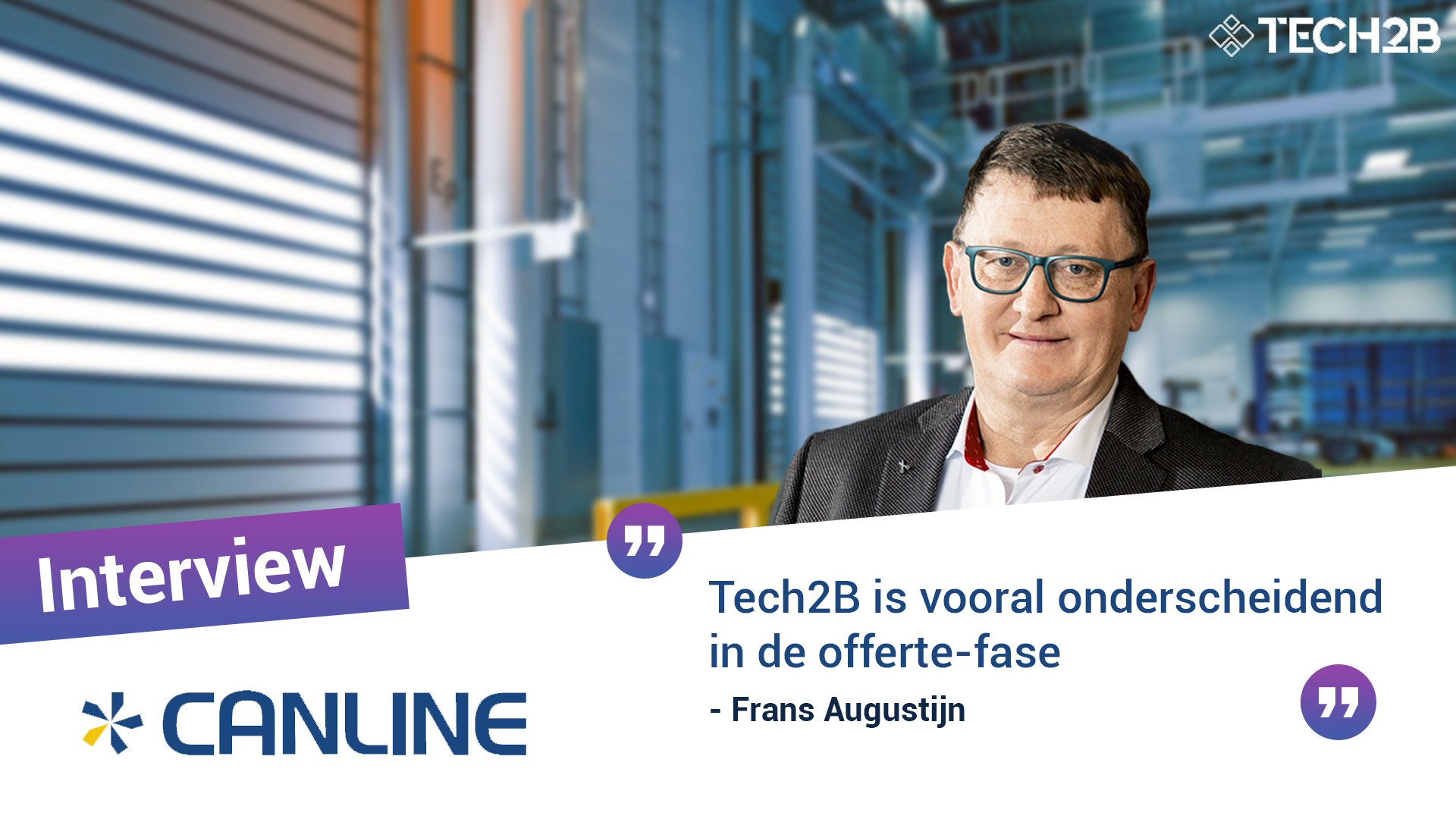 “One of the founders of Tech2B, Dirk Wouters, used to work for Canline. When he was working on it, he already asked me to think along, we regularly discussed it together. Of course they needed a few first users at Tech2B, so that's when we started with the platform.”

Frans Augustijn is the founder of machine builder Canline, he stood 'next to' the cradle of Tech2B. Now a mature platform: “In the beginning you naturally run into teething problems, we were selected as the first user for a reason. But gradually the process got better and better, we were also well informed about the developments. The platform is now working well, it provides us with a lot of efficiency gains.”

Do you see a lot of potential for Tech2B?

“Yes, of course, but the concept still has to prove itself. Many outsourcers are used to using Marktplaats as a private individual, but B2B often involves one-to-one relationships. You have to do a lot to set up that marketplace function in B2B, you create a new playing field with new rules and everyone has to get used to that. Everyone is looking for the value it brings to them.”

Tech2B is particularly distinctive in the quotation phase

“The value of Tech2B for us is mainly that sending emails and heavy files is a lot more efficient, especially in the quotation phase that is valuable. If you want to submit an application to several providers, have to search for and approach them individually, that is a lot of work. At Tech2B you put the application on the platform and you offer interested parties the opportunity to make an offer. In the future, mail traffic will disappear, Tech2B will take over that function and make difficult communication much easier.”

What do you think is the greatest strength of Tech2B?

“As an outsourcer, in the past I often received no responses or too late to requests from suppliers, sometimes regretting later that I had not waited a day longer. Communication is more easily regulated on the Tech2B platform, you do not have to maintain it yourself. And you don't have to send those heavy files up and down either, everything is downloaded from the platform and all communication is centralized. You no longer have to search in mailboxes, especially as a buyer you sometimes have thousands of these kinds of complicated application processes per year.”

“I also looked at alternative platforms, but the 'quotation to order' part is much better organized at Tech2B. Those other platforms do arrange communication with well-known suppliers, but the part before that is not well covered. The traditional one-to-one thinking, while outsourcers also want one-to-many. Tech2B is probably the only one in that. Or at least the best.”

What is your background?

“After graduating in business administration in Eindhoven, I started working for the company Walker Hagou in Bladel. After an intermediate step at other companies, I received a call from a former colleague about a management buyout of the company. We started in Eersel under the new name Canline, which was sold to the Swedish Xano Group in 2015. Canline builds transport and handling systems for cans.”

“I now work for Xano as a Business Unit Manager, also for other Xano companies. I am mainly involved in cross-company projects such as acquisitions and purchasing contracts. We have a strong digitization agenda. That is why I am also working on new platforms such as Tech2B of course, I am always interested in new opportunities.”

Do you also want an account? Register here and try it without obligation!